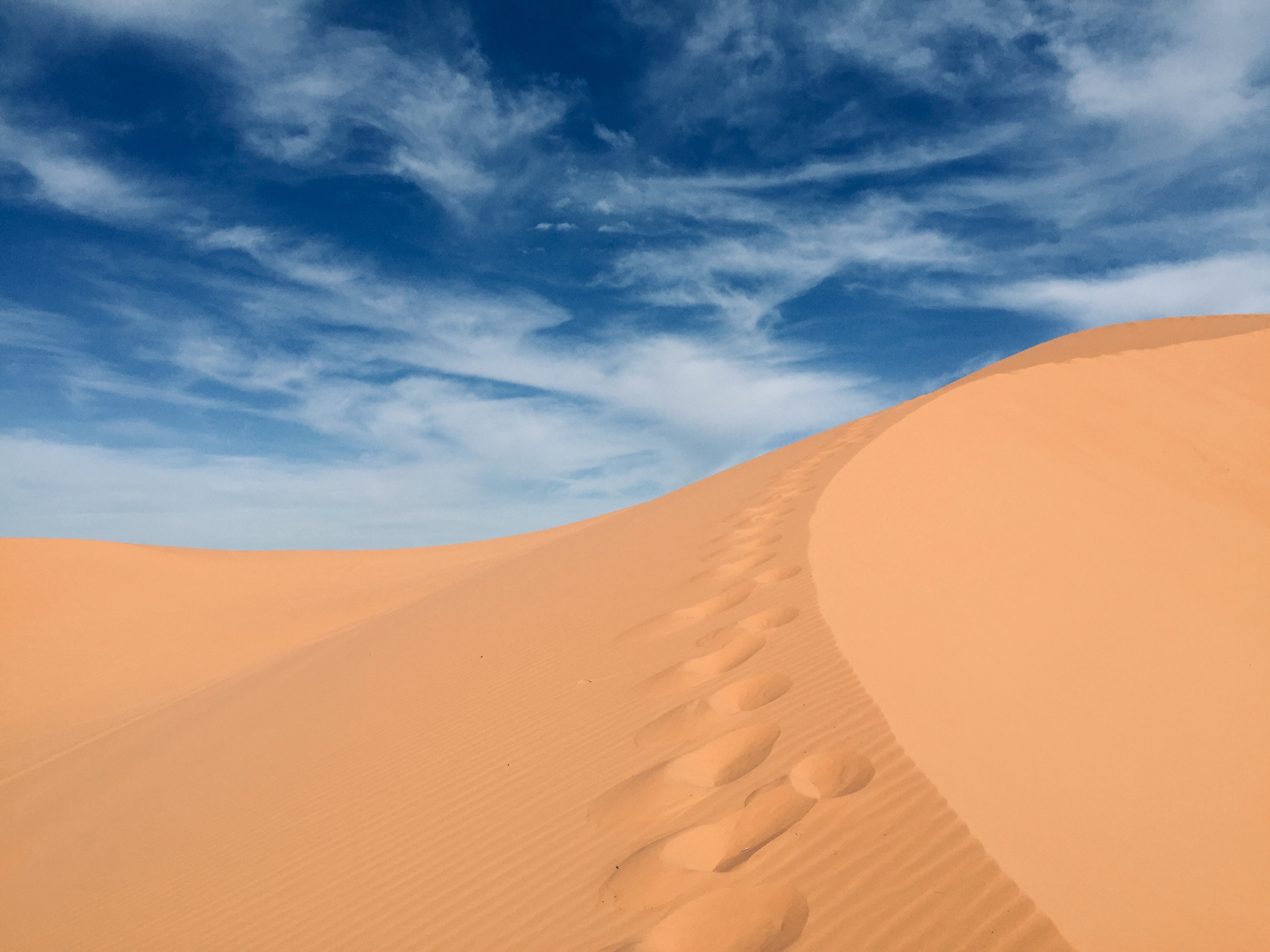 I woke up in Kanab, a very very small town in Utah, where I will eventually go back, or so I hope, because there is a place you can only access through a lottery due to its fragility. It is called the Wave, on the slopes of the Coyote Buttes in the Colorado Plateau. This and the one in Australia (although I am sure there are way more all over the world) are the two I want to see. Hopefully one day, soon.

There’s no Starbucks near me, so I need to get round by stopping at a gas station and get a Cliff bar. That’ll do. And it did. Although by the time I got to Zion I was starving. But that’s another story. On my way to Zion National Park, I saw again a sign that captured my attention last night while scanning the road for animals: a deer, a buck, a something from that family. Two on the side of the road, and one actually crossed right in front on me, so I slowed down as fast as I could and let him pass. Sweet little thing. If only everyone else could do it. Anyway, the sign said “Coral Pink Sand Dunes“. Sand dunes? I’m game. I set my gps and I begin my journey to the Coral Pink Dunes. I wonder if they’re really coral pink. Then I remember that today would be my grandma’s birthday, and I once gifted her a pink coral stone before an open heart surgery she had to undergo many years ago after a stroke. I got that stone because the “pedrera”, the woman at the rocks shop, said it was the stone “linked” to the heart, a healing stone. If you believe or not in the therapeutic power of stones I do not really care, because what meant to both me and my grandma, at that time, was the symbol it brought with it. She kept it in her bra right before and after surgery and she was fine. She recovered and lived for years before she passed away in 2015. Time flies.

I do not believe in coincidences anymore. Although it may be just it, this gives me even more willpower to go see them, and they’re beautiful. I did it for grandma. The color is more orangey than pink, but still different than the dunes I’ve been to, so far. In Peru and in Colorado they were golden. In New Mexico they were bright white. Here they are coral pink, and they are as perfect as the others. I love dunes. There’s something magical in the sand. I get there at 7AM on a Sunday morning. There is no one around, what more could I ask for? I hike up reaching the rim and I look around. Once again I can hear nothing, and this deafening silence is something I’ve been cherishing for since my first time in the Mojave desert in 2011. It just can’t be explained. I sit and I sink my hands and my feet in the sand, which is cold where the sun can’t reach, and it’s getting warm little by little with the sun rising up in the sky. It’s been a while since I properly meditated. I do transcendental meditation. I took the class in 2017, my first time in LA, and the story is too long to tell, but even back then, it wasn’t by chance. It was simply meant to be. I do my twenty-minute ritual, I repeat my mantra and the sun kisses my skin without being too hard. If I had to describe the perfection of a moment, it would probably sound like this. No, it definitely would. Yes. I open my eyes and I stand up, sinking deep and falling back on the sand. I laugh, feeling stupid, but at the same time I know no one saw me so… that’s ok. I hike back down, right on time before some guys come with their quad bikes and the buggy. Amateurs. The point of being on the dunes is to hike them!

Zion is another spectacle that this Earth and nature gifted us, and it is actually better organized than both Yellowstone and Yosemite, because cars are not allowed on the trail that takes you through the various spots. People have to park in a lot before the trail begins, and you can only ride a shuttle back and forth, making it so much less chaotic and more pleasant than waiting in line in your car for hours. I always wanted to visit Zion. My preference for the Jewish culture may have something to do with it (Zion is a biblical word, in the first five books of the Old Testament –the Torah, in Hebrew, meaning a place of peace and refuge or sanctuary), but being one of the best national parks in the world, it has been on my bucket list for a very long time. The atmosphere is peaceful and the rock formations are typical, beautiful, perfect. I decide to go for a hike at the stop of the Weeping Rock area. The trail I want to hike is closed because of rocks falling, but to me “no” is the new yes, so I ignore the man made block and I start walking up the mountain. Breathless and a little worried some rocks could actually fall over my head, I keep going until I sadly find out why the trail was closed. A massive rock slide was totally blocking the passage and I could not go further. I wanted to reach a point called “hidden canyon” and I just guess it will stay hidden for a while longer, because no one will see it until that slide is fixed. It was still worth the fatigue though, because I could see that part of Zion from way above (although not as high as Angels’ Landing which is the highest point of the canyon), but also because I had to accept the fact that my fear of heights is getting stronger and stronger with time. It bothers me, but I have to accept it, I think it comes with aging. Oh, and it was worth it because that look in the eyes of those few people seeing me coming from the path where the sign said “Stop here. Trail closed. No trespassing” was priceless: a perfect blend of dissent and wonder, dislike and puzzle.

On my way out I stopped in Saint George, another town that offers some amazing views, where I spend the night and I plan on getting my oil change (again!) because the “maintenance required” light turned on last Friday night. I could have stopped somewhere else, or have reached Vegas which is so close, by George is the name of my uncle, the one who has always protected me and helped me, even when I was about to enter the world with my mom almost giving birth to me, in his car, on their way to the hospital. I take this as a way to say that in this town I’ll be safe tonight. Plus the hospital parking lots have always given me shelter these past few weeks, so I feel comfortable there. I find a city viewing point and I go watch the sunset before getting ready to spend the night in town. There is no one around for a few minutes, until a couple of teens comes up the stairs and sees me. I can hear their voices in the distance, although they whisper seeing me there, standing still leaning on the fence, facing the horizon: what is she doing? – I don’t know. What is she doing -alone-? – I don’t know, she’s just standing there. Then I can hear the clicks of the cans they opened, I turn for a second, they’re hugging, they’re kissing. I take a couple of photos of the sunset, and I just think of giving them space. Enjoy it while it lasts, kids. Enjoy it.