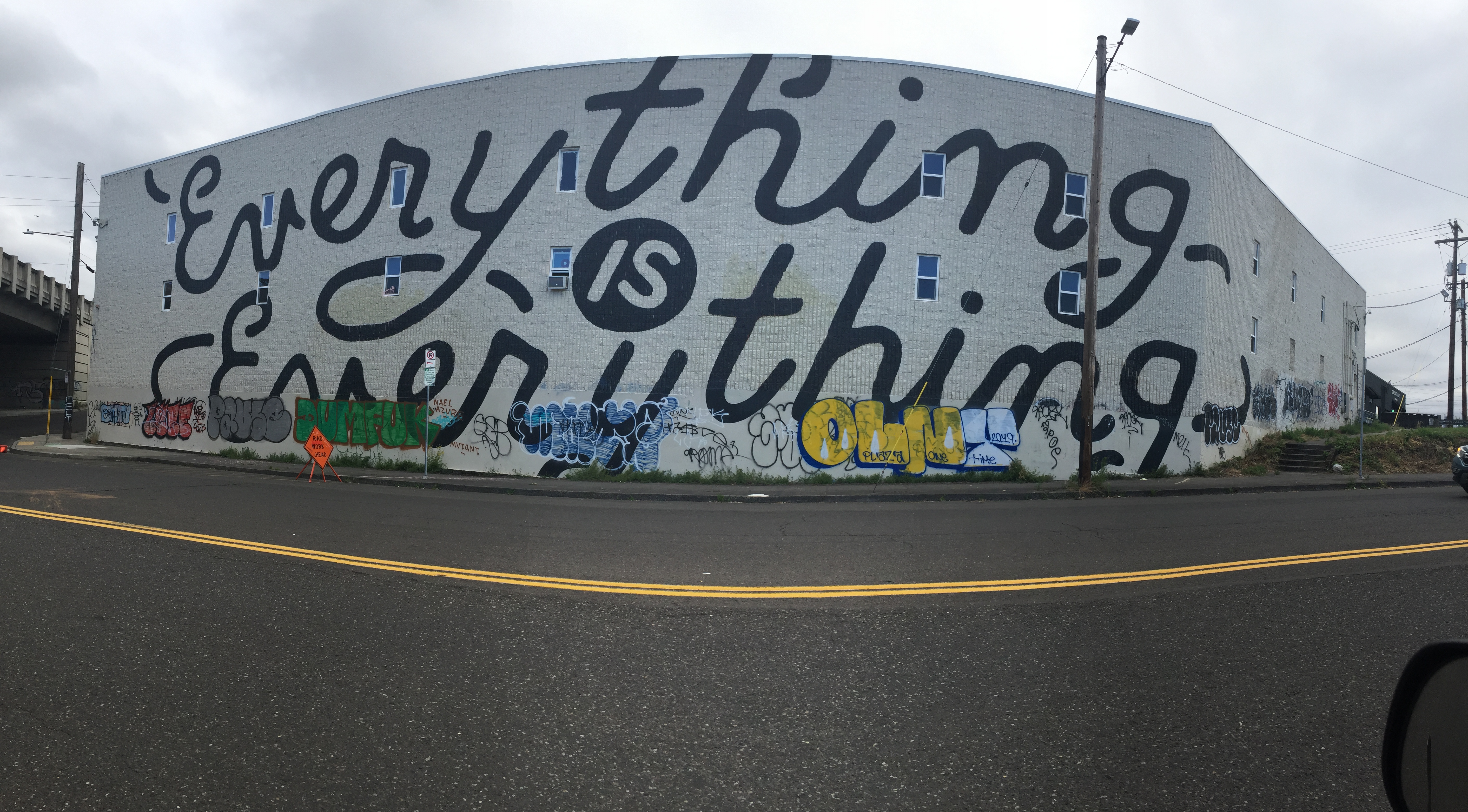 …says the famous mural in downtown Portland, Oregon. I left my last spot in California this morning after having fixed a couple of things on the website, posted on Instagram for the curious ones, and a quick run to wake me up and keep me going. As I haven’t been drinking caffeine for so long, in moments like this when I don’t sleep much and I just drive, drive, drive, I wish I could rely on this wonderful substance to just keep me awake, but I’ll resist. Sometimes I believe getting the decaf at Starbucks will trick my mind in thinking I am having the actual coffee so that a spark of energy comes without the side effects affecting my troubled heart.

It’s a wonderful sunny day in Portland, but Google maps wants me to have the first dumb moment of the day, taking me to a public parking lot, which is not eventually public, so I have to pay a 7$ fee for 10 minutes. Welcome to Portland I guess. So instead of looking for “public parking” on Google maps, lesson learned and I just look around, finding out that Portland has parking structures basically anywhere. I finally find my spot on the first SmartPark structure close to me, and I start exploring. The sun, we all know this already (don’t we? hmm), makes everything look better to my eyes, so I start strolling looking like a baby girl with a lollipop, toddling down the streets of this curious city. I finally find that VooDoo Doughnut place I once read about on VegNews. Yes! Vegan donuts for the win win and I’m off to the waterfront where I can walk in peace to have it and chew in peace. Oops, nope, wrong. I can sense the eyes of the people weighing on me while passing me by, and I think “oh shit, what now? Do I look dumb? Can they sense that I’m not from here? Is something wrong with me?” until this guy approaches me while talking to his two friends and their baby, playing on the side of the boardwalk. I can’t hear the first words he says because of my headphones, so I take them off and I ask “excuse me?” and he goes “you can’t just walk past us with a box of donuts!” with a nice look on his face, which does not bother me as it did when these other guys tried and talked to me in Santa Cruz. Why? Eh. It must have been Jupiter aligned with Venus this time or whatever. I smile back and I tell him that it’s only one donut actually, my dinner, otherwise I would have offered. We keep talking for a couple of minutes with the other friends too, they suggest places I could go to, being in town for just one day, and then I leave pleasantly surprised by my open reaction (must have been the thought of eating the donut soon!).

I easily find myself walking up and down the one-way streets, noticing how Portland reminds me of those typical cities I am used to either travel to or to live in: Boston, a smaller version of New York, but most of all, Melbourne. Downtown Portland took back memories of Melbun, the docklands, the walkable streets with trams and buses, the bridges, the dark bricks of the buildings… everything so very different than what I got so used to see in Los Angeles. So. Very. Different. While taking some photos I stop at the gym to see if I can use a guest pass, and my positivity today helped me score a pass I was not qualified to get confirmed, due to me not being local. Instead, this kind guy helped me made it happen. The following morning at 5 I would be at the gym. This is getting weird I know. I am aligning to the weirdness of Portland maybe, who knows. I continue my tour of downtown, and I can still sense attention towards me. Am I that obviously foreign here? Then this man with a camera in his hands stop me, and kindly asks if he can take a photo of my shirt that says “Find what feels good“, a token I got from my she-ro’s website, Adriene Mishler, a great yogi I started following while still in Boston almost five years ago. Dang. Time flies. I tell him to cut out my face from the picture, he says what a waste yadda yadda, and eventually he shows me the photo of this head-less person wearing a nice tank top that may have been the reason why people kept on staring at me. I would have never thought that shirts with a message could capture people’s attention in such a way. I should wear slogans more often. Maybe more meaningful ones. Or maybe not. I don’t like to be stared at. Duh.

I feel kind of tired, so I just try to be comfortable for the night, waiting for the morning to come to see a couple more thing before leaving for our next stop, and unfortunately I can’t sleep. After a troubled night, I head to the gym in the morning, but I am too tired to accomplish anything, so I just run a little, take a shower and take off. It’s a sadly grey kind of morning so I decide to look for a few more murals to get snapshots and possibly a city view. I find Pittock Mansion at the top of a hill, but the view is not really that nice, maybe at sunset it would be cool, but I need to leave way before then. The road is calling. Moreover, being 6AM on a cloudy day, the crisp air is not enjoyable with my wet hair and most of all: there is almost no one around and it feels creepy. I reach the stunningly beautiful mansion and the parking lot is empty but open. After a really short walk I see the terrace where it says “scenic view” and there is a man standing, texting on his phone while facing the city view: a runner, considered his outfit. I get closer and he does not even notice me at first. Probably not even at second. Or third. Jokes apart, I get a sense of mystery in his energy, my mind starts making up potential stories with this person. Was he texting his ex? His current wife? His husband? His mom? Who knows. What was he saying? “The city looks beautiful this morning, just like you. Wish you were here”? (vomit) or maybe “I know you hate me but I miss you” (better), “yo, what’s up?” (super bad!)… I mean, billions of possibilities, and I basically had a whole movie ready in my head in a matter of seconds. We both left, he started jogging, I got in the car. The end. The most boring movie ever.

Now, I just have time for a couple more snapshots and then I have to move. I hike for a half hour to find what is called “the Witches’ castle” and when I find it I am so disappointed I just don’t even care about it much anymore and I turn around quite fast. On the contrary, I find the last cute murals and I leave Portland content enough. I felt like Alice sliding down the Rabbit Hole. Wooden house alternating brick-stone houses, forests and hills, city life and nature filled place. A little Wonderland for sure. The memories it brought back, and the idea of being a livable city (and among the most vegan cities in the US) let me gave Portland good ratings, and so my last words were not “good-bye” but “see you again someday, PDX”.