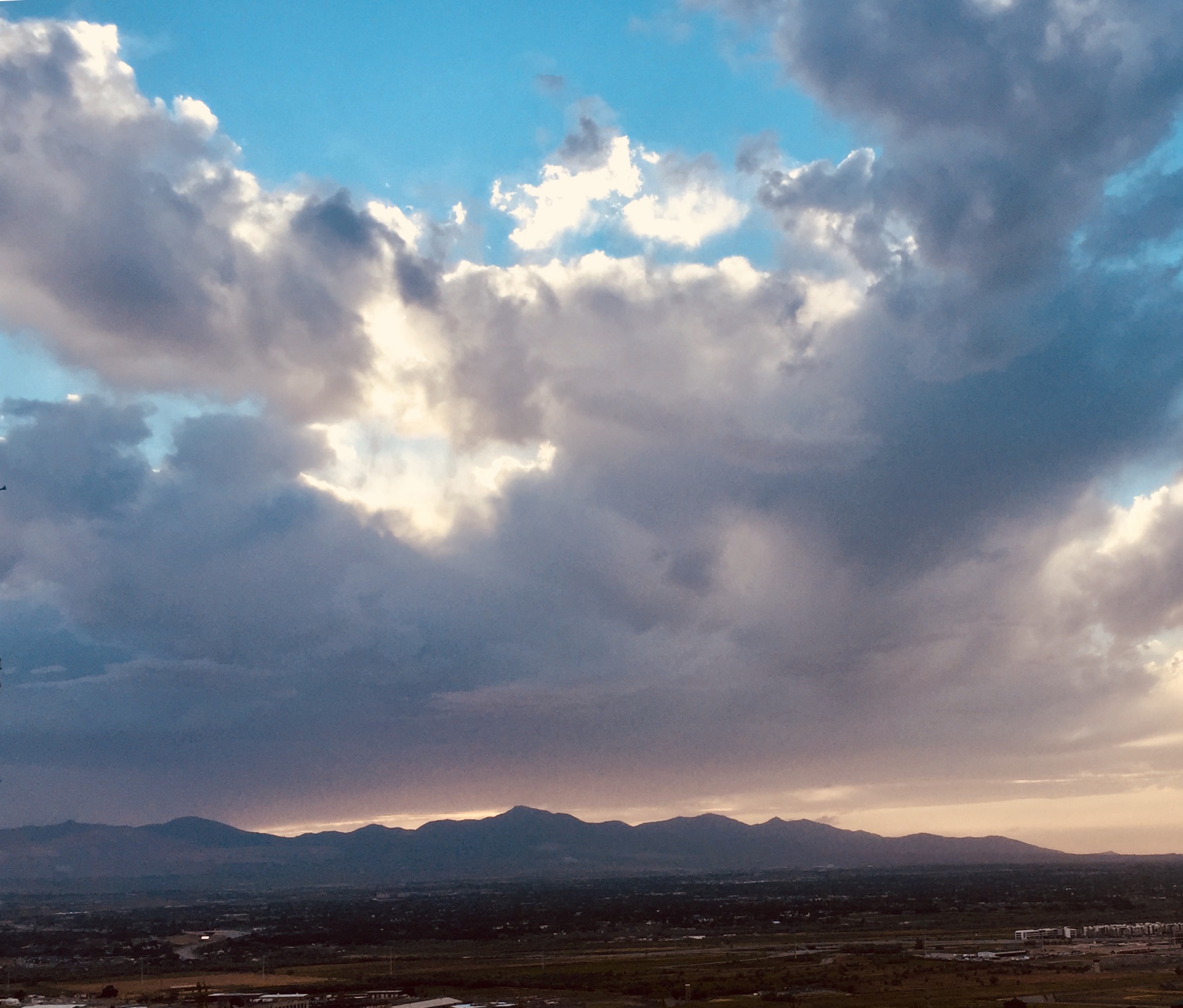 I forgot to say that driving back from Yellowstone I witnessed the murmuration of birds, but could not capture it for you to see. Just imagine a flock of birds twisting and turning in unison right before your eyes and the the purple-pink breathtaking sunset over the horizon. Lucky? I know. So grateful. To complete this praiseworthy experience, I had to pull over in the middle of nowhere before entering Utah, because yes it was black all over me (although not completely as the moon was so big, and shining so bright that it was almost lighting up the whole sky! I know, unbelievable, but it’s true), but had to stop and stare at the sky, as it was full of stars. I had to admire the beauty for a bit, and then I kept going.

In the morning I reached Salt Lake City, UT. Except for a quick tour downtown, an even quicker stop at Starbucks and at a gas station, I haven’t really seen the city, did not really feel like it. As soon as I got downtown I felt like searching for a place to hike, so I left. It is making me too uncomfortable to see homeless on the streets, and most of all those who are passed out, lying careless on the sidewalk with people ignoring them. It makes me feel sick, I wish I could help, but then I always remember that time in Liverpool I left food and a couple of Pounds to this guy right next to the hotel where the students I was escorting were staying. The following morning he overdosed right next to us. I felt responsible although I know what I left wasn’t enough for him to do something so extreme, but it touched me deep, and I started questioning if it is actually good for them, or rather for our conscience, to give alms instead of helping them in some other way. I wanted to do it while in LA, some PBJ sandwiches, a bottle of water and an apple in that typical brown paper lunch bag were always on my mind ready to be prepared. I just waited too long for someone to go with me and distribute everything. When I asked my “friends” there to go with me, I got mostly no’s and “yes, as soon as I’m free, too busy now”, which eventually lessened my faith in humanity, time passed, and I was too focused on surviving, so now I’m here. Hopefully I can make it up to it, soon.

Talking about “friends”, how often does it happen for two friends to end up in the same random city, hours away from where we both live, on a random day without planning it, finding it out on Instagram? It happened. I reached out, but apparently people are way too busy to meet at present, even for just a quick coffee anytime during the day. Everyone but me. If I want, I always find even 10 minutes to stop by and acknowledge the existence of people who shared part of their life, either long or short, with me. But that’s the point, if you -want- to do it, you do it, otherwise, you’re too busy. Except while in SLC! After 7 years I got the chance to meet again with one of my favorite married couples I used to work with while in Aviano, at the US Air Force base in Italy. They found the time to meet me, even for just an hour or so; we hugged, we chatted, we laughed, and then they wished me safe travels. Relatively quick but intense, just the way I like it. Thanks guys.

Before driving up North to see them, and then back down South to continue with my journey, I went hiking like I was supposed to. I found some nice trails in Big Cottonwood Canyon and started the day. I realized that driving makes you lazy. You sit there for hours and you get so accustomed to it that, although you need to stretch out, when it’s time to get off and walk you act like a little spoiled brat thinking “naaah, I don’t want to go I just want to rest”! No! Wrong. Bad girl. For instance, when you start walking, first you’re like “ugh, I’m tired” then “uhm, it starts feeling good stretching my legs”, followed by “oh, this is nice”, ending with “cool, I’d do this forever”. Because walking does not really tire me that much. My legs may be a little sore after many hours, but it feels good. I haven’t been on loooong walks since Sequoia. I hiked for I think five to six hours that day. Now I’m just going for strolls and my body is gaining weight for sitting in the car for too long. I need to fix this, because walking does me good, mostly after my surgeries –when I was crying for not being able to walk, and had to learn how to do it all over again, so I need to move. It gets addicting. I feel stupid thinking about this because then my mind takes me to my friend Andrea, who is walking like –for real! He walks with his inoperable cancer to the head of the pancreas defeating every expectations from doctors and experts. He started walking after his life saving treatments, when they sentenced him to the waiting game. I know. Hard to even just think about it. He does it for hours, though. Walking, I mean. Day after day, he walks all over Europe (for now). He wrote a book about this part of his journey on Earth, to be a loudspeaker to those in need, to those who, like him before, are not aware of what pancreatic cancer is, because it is still considered a subtle silent “motherfucking” evil carcinoma. Andrea to me (and many others of course) is a little hero and here is his page. Check him out. You must.

Therefore, after thinking about him, I felt stupid. As far as I’m concerned, I am not taking any tumor for a stroll to try and stay alive, so I should just walk and shut my mouth. I swear I do. I don’t usually talk while walking. It’s my mind that starts rambling. Andrea started walking because he did not want to die, he wanted to live and to make of the short time he has left on Earth worth living (or dying) for. I started walking because I did not want to live, and I had to figure out why. Everybody is different I guess, so please avoid any judgement. I already know all this is messed up. If it weren’t, I wouldn’t be here talking about it, don’t you think? Good. Moving forward. My mind took me to those philosophical questions: what is life really? What is death? Life is the opposite of death. Nope. Death lasts a moment. Life lasts for longer. Try again. Ok. What if life is like a Stargate? What if life itself is the actual portal between the cosmos, and we are all just travelers? Death –seen as the end of everything, does not really exist, and life becomes this temporary status we get while traveling between“worlds”. Someone passes through the Stargate for minutes, some for a few years, some for almost a hundred, but eventually, everyone leaves the Stargate and keeps traveling. We are only allowed a certain amount of time because on this planet we need a mortal body to travel, as if our body is our passport to enter the Stargate. So the body is the passport, not the Stargate, just to make it clear. When we’re not on Earth, or let’s say “alive on Earth” we are dead here, but we may be alive somewhere else because we’re just going through Stargates! We can’t be “non-infinite” in an infinite universe. Come on! “Matter is neither created nor destroyed” right buddy, Antoine? (Lavoisier) And neither is energy, says my other friend J.R. (Mayer), both endorsed by Albert (Einstein) eventually; so what am I even talking about here? It should be obvious! Can we please talk about it? Let’s chat. Drop a line.

On a less crazy level, one thing that actually stroke me these past two weeks is how I am falling in love with all the places I am visiting. I am seeing beauty all around me, despite a few flaws here and there, mostly created by humans, not by nature, and I am amazed at this feeling because when I get to the point of thinking “ah, I would stay here at least a little longer” I know that something got me and it scares me. It frustrates me really, because I have to leave, but I like the fact I am loving everything around me, and maybe this is what I need. I need to learn what love means, in order for me to start loving myself. That, I am sure, will make me heal, inside. I guess this Stargate was broken and the whole point of me getting here was to fix it. Explained why I am a fixer. I fix broken things. And all the broken people with their broken Stargates are attracted to me somehow. I am laughing so hard right now, at my own imagination, that if only I could be good enough to make a living out of it, I would probably hit the jackpot.

On a last, lighter note, much lighter note: am I the only one thinking that being a biped sucks? Yeah no, because, it may just be that I am simply clumsy and I always trip over my own two feet, but I would feel much more confident if I were a quadruped. In addition, when I dream of running away from something in my sleep, I always end up switching on all fours, grasping on the ground below me with my hands, gaining velocity, because while standing I couldn’t move and was stuck, now I can run away from whatever is chasing me (in my dream) and I also am doing it fast. Was I quadruped in my previous life? Jokes apart, is bipedalism a flaw in evolution, instead of this great hallmark adaptation? Ah, the joys of questioning everything and anything, along with the pleasure (or not) of never having the right answer, but a gazillion silly hypothesis. Let’s head out for the rest of Utah, shall we?