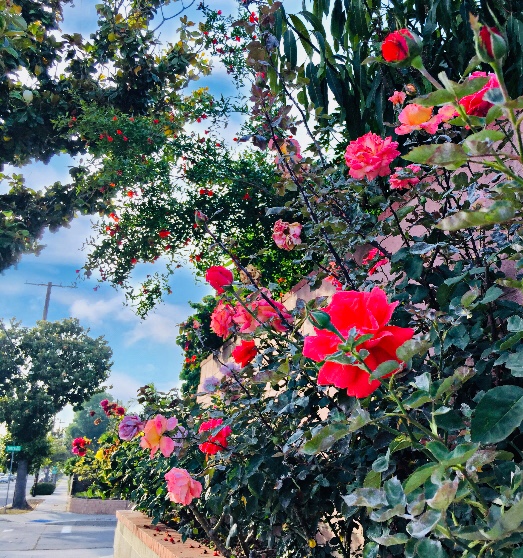 “…I guess that sometimes good things fall apart” plays while getting in the car after my second to last session at Los Feliz Boxing (song by Illenium with Job Bellion). I will miss listening to KROQ radio (106.7 in LA and Orange County) while on the road, but I will survive. When I went to visit the building where the radio stations are I was surprised seeing what they had over there: a little Wonderland place, with Gumball machines, neon lights and more. It’d be total fun working in there. I guess Spotify will have my back in the meantime. Anyway, there’s always music playing at the gym and sometimes the playlists our trainers pick to lead our practice are completely in line with my taste, so I dance, I jump, I shuffle, I sing… all while punching a bag or following instructions. At a certain point during today’s class, my instructor looked at me and said, I guess in a joking way: “pff, weirdo”, and I could not help but laugh. I am pretty positive he was saying so in a funny way, because it is far from being an insult to me. Call me weirdo, call me crazy, I dig it. I am honestly glad to be called a weirdo because that means that people finally see me as someone –or something, different, and I cannot care less if their opinion is judgmental or appreciative. I’m just cool with that and I am actually kind of proud too. Sometimes I recall the pain I felt, as an adolescent who was trying to fit in and did so many silly things just to be “like them”, to be included, to be seen. Silly goose. I should have kept on being the outcast, the girl who’s always smiling, the whatever they wanted to call me… because I did not care, until they made me care.

While walking through the streets of west side Burbank, but also while driving down to Hollywood, I find myself getting lost in memories that eventually lead to plans, to ideas really, that I have, and I just let them free, to go out there, to the Universe, because apparently I basically can do pretty much nothing about or with them, as they’re either not doable or simply tagged as Laura’s ideas, which is a trademark to say “yeah, it would be nice if only someone could sponsor it”. I was trying to find a way to post things starting Sunday, so that people, you, can see it and read it while keeping track of this adventure, but I did not want to do something already seen. Unfortunately I still haven’t found the right formula to make this whole project look appealing to most, but to be fair, I am content with those few friends who told me they look up to me because I have and had the balls to do things they could never do. They said they see the world through my eyes because they cannot leave or travel and they thank me for that. How amazing is this? I feel honored to be the one who shows them those little corners of the world they may never see in person (although I wish for them to be able to do it one day!!) and this always takes me back to when my grandma used to tell me: “Go, go, see the world and send me a postcard so I can see it too!” –yeah postcards. Remember those little photos on paperboard we used to mail before emails showed up? I was never the one writing only “Greetings from xyz-London” because my postcards would be open letters that the mail person could read if they wanted to, and I could not care less, because I had no secrets. I used to write down whatever I was feeling at the moment, while sending a message to a family member or a friend, no filters, no maximum characters to be used.

All this to say that I’ve come up with the idea of journaling twice. Yes, yes, no worries, I won’t bother posting everything on the internet: one part of the journey will be written on paper. Or better, later on it will be printed on paper, at least. Because, honoring my grandmas, although none of the two are here to read me, I have decided to report things on a more personal and deep level so that they will be read only by those speaking my native language. Those who are living on the other side of the planet, beyond this horizon and the Atlantic ocean, who had little to no chance to see the world, but are capable of traveling with their minds while reading through what is offered to them in words, picturing different worlds and scenarios. I will try to be as detailed as possible, following that amazing style I once had to study to write my dissertation back in the days; a style that belongs to Mary Austin and the way she talked about Southern California in my beloved book The Land of Little Rain. What I see, what I hear, what I smell, what I feel… will all be documented for those who want to get a sense of what it is like to be hitting the road, with nothing left to lose.