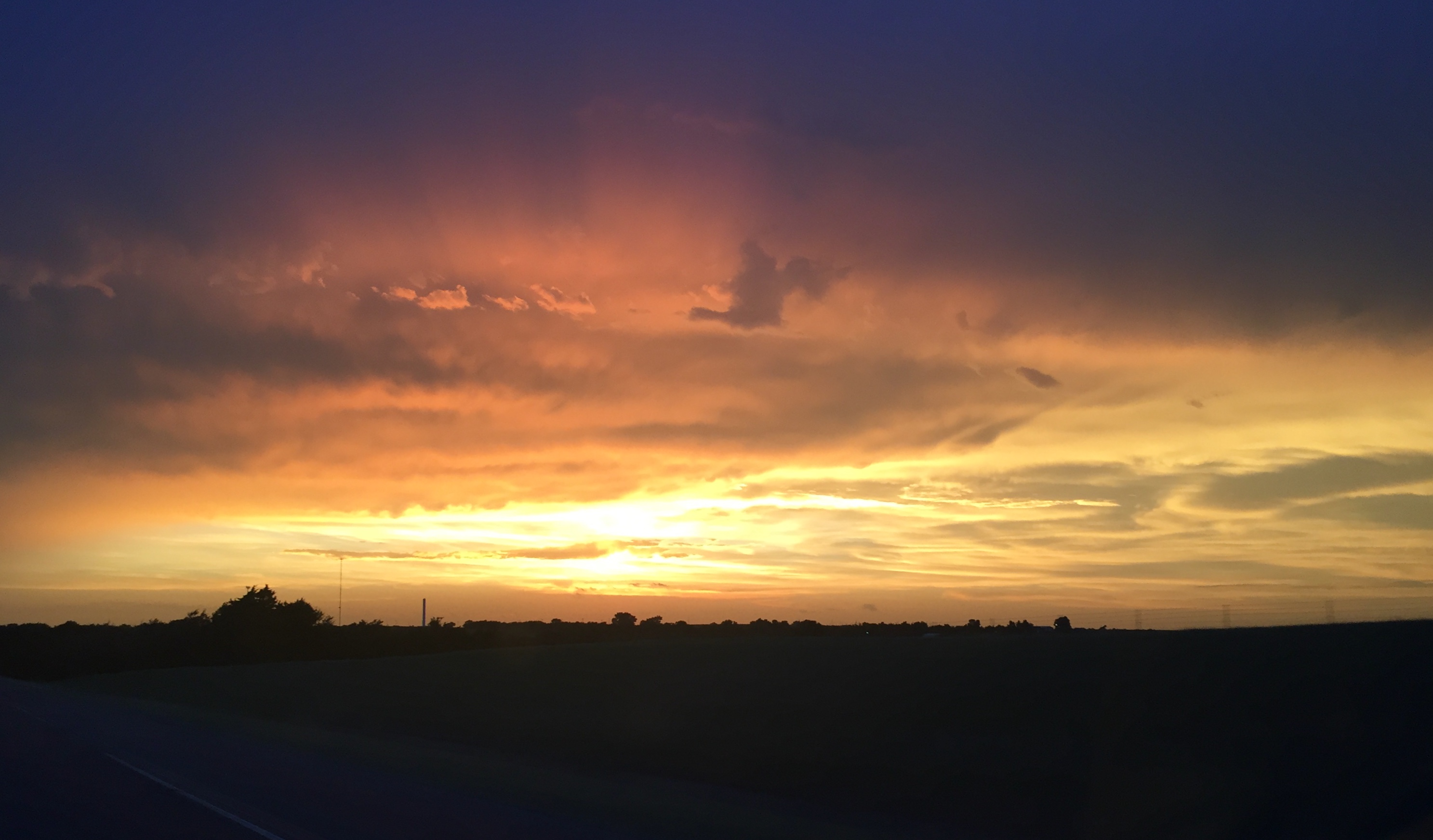 Leaving Nashville, TN nature gifted me with a spectacular sunset so I decided to go for a quick run down the riverfront of Memphis, right at the border with Arkansas. The river, of course, it’s the Mississippi. A huge river I would say. So huge. I needed that short run, I felt better right after, so I could stay awake before reaching my “destination” for the night: Little Rock, the capital of the State.

I find a place to spend the night and everything works smoothly, except for a couple of bucks I wasted trying to make a car vacuum work in the remotest car wash of the city. It didn’t work. I wake up in the morning and the sun is already burning my skin at 6 AM: I like it, in part, but I always fear the car may overheat and leave me stranded. Reminiscences from the past, I suppose. My usual stopover at the closest Starbucks, but the plan of updating the blog went up in smoke because it was packed. Apparently one of the very few locations in downtown with a drive through… and the poor staff was going crazy. I take a walk on the riverfront and realized the only people awake at 7AM downtown are me and the homeless. I wanted to go to a Library and there were a few, but they opened at 9, or simply closed for the holiday. Bummer. Remembering it’s July 3rd and tomorrow is Independence Day, I add a stop at Whole Foods, buy way too much stuff for two days to make sandwiches, and I’m back on my to the West.

I’m a little bummed I won’t pass through Kansas, as I was a fan of The Wonderful Wizard of Oz and that is where Dorothy was from, so I’ll pretend it was Arkansas instead, and I sing the songs while riding my good old car. No red shoes with me unfortunately, and of course “there is no place like home”, just need to figure out where it is. Endless roads in the middle of nowhere, my mind tossing off thoughts like there’s no tomorrow, and I stumble in fictitious conversations I imagine having with people I will either never meet again or not anytime soon, or simply pseudo-philosophical ideas taking place for no reason while trying to stay awake with SiennaMiller –the car, set on cruise.

I think about the fact that I forgot to mention that I saw where John Wayne was born, when I was still driving through Iowa, as well as where the Bridges of Madison County by R.J. Waller was set. Ah, Francesca. Well, now I said it. If you do not know what or whom I am referring to, sweet goodness, google both John Wayne and Waller, for your own sake. This said, my mind was just rambling today. I was thinking about freedom, probably inspired by the “land of the free and the home of the brave” quote in reference to “Happy Birthday America” heard on the radio, but also gender, nature, and … I don’t know. Really, just try to consider every time you’re lost in your thoughts and you find yourself thinking about the sun and the moon when you only started it all with just: “this is such a tasty beverage I just got at Starbucks”. Something like that. In addition to this, while listening to the radio, they always come up with discussions and talks with either hosts or simply reporting news, so all summed up here I am, talking to myself. We are not really free in this world, so no matter how I want to consider this whole “thing” my freedom experience through the U.S., at the end of the day, I am partly free, but not completely, and I must say, it bothers me a little. Ok more than a little. Ok fine, it bothers me a whole lot. Basically I hate it.

Freedom …of choice is what we have, and not even in full, considered the time being. Instead of evolving we’re going backwards, it’s infuriating. I don’t even know how I got to the point of remembering when I was in Massachusetts the first time, and I had this assignment about “Undoing Gender” for my psychoanalysis class. I really worked hard to prove it, I think I made my point back then, but as of right now, it is just impossible to undo the actual gender. Let me explain. English is a language (bullet that I used back then as well, by the way) that is not “gendered” and, in order to refer to something by emphasizing its “gender”, you need to add a word next to it to refer to the masculine or feminine aspect of that “thing” you are trying to explain. The articles and the adjectives do not allow you to understand if a thing is feminine or masculine. Romance languages (and others as well) instead do. So for every word we have its form: if it is masculine or feminine. We know. That’s why, most of the time, I like to play with the words in English and say, for instance: my car, she is my best friend. Because car, in Italian, is feminine. Not only that, but also city, in Italian is feminine, but in English I can put a gender to “it” and play with it. New York to me is a woman, just like Los Angeles, whilst Seattle and Washington are men. Why? I don’t know. Nature in Italian is automatically a woman. I mean, it’s a feminine noun, which eventually translated into Mother Nature to make it a female. Long story short, gender exists. In nature we have genders: we have female, male, sometimes hermaphrodites. The whole animal kingdom is like that. We are animals, so we were genetically born as either one, the other, and less often (but it happens) the third. To this I should also add what I learned at that time in Mount Holyoke, where I got to know about herms, ferms, and merms, making it up to a total of 5 intersexual groups. (Read this if you want to know more about Fausto-Sterling’s article)…but let’s stick to the point because I am getting off track. What I want to say is that, by nature, gender exists, you cannot undo it. If you’re born with a penis your body is the body of a male. What is not “by nature” is the identification of it with your persona. You can be born with a penis, your body is male, but your identity is not. You can still be a female at birth but your identity does not match with the way you look outside, or vice-versa, or anything in between those 5 levels I just mentioned above. BUT you MUST be free to IDENTIFY with whomever and whatever you want. Is this possible in 2019. Not completely. And this sickens me. Also, there was a research about a massive percentage of Americans who are not born “complete” or fully formed in one or the other gender, (again read it here) and they just get fixed right after birth following either a surgeon or a parent’s discretion, causing what will eventually become a real discomfort to the baby while growing up, as she or he is not feeling him or herself in the body that was “fixed” for them; he or she may have psychological problems, and many even commit suicide. This to be added to the fact we are not free. Period.

What is freedom then? I don’t know how I ended up talking about all this, but hopefully you got the point about being free in a society where freedom is not an actual choice, or not in its whole. With these thoughts I drove through Oklahoma and my irascibility grew stronger. I found myself in the middle of nowhere, driving around stooopid people. Where are you all even going on July 3rd? Shouldn’t you all be home getting those stooopid fireworks ready and getting your stooopid BBQs on fire? See? Anger. Anyway, despite the bad mood I stopped in Oklahoma City because the weather was starting to be inclement. A huge storm was coming and I needed to update the blog because I did not do it in the morning. I find another Starbucks downtown and take a rest while writing. Once the sky cleared up a little, I felt like doing something productive in OKC so I look for a riverfront area and I find it: I need to walk. A walk which turned into a run, which turned into a longer walk with no one around me for so long that I had the chance to sing out loud all the songs I had on shuffle on my phone and in my ears. I think only the geese and the crows heard me. Hopefully. I just gave a little show to nature walking back to the car, all sweaty but relieved. Anger was almost all gone. And I think Oklahoma wanted to thank me for stopping by offering a sunset, behind the storm clouds, that I cannot express with words and the photos are simply incapable of showing the truth. With cars and trucks speeding around me, on my left and on my right, I took my time on the highway heading towards Texas enjoying every little second of that big red sun setting, the strong winds and the rain that came right after, with the sky lighten up every other second, and the flash flood warnings buzzing on my phone.