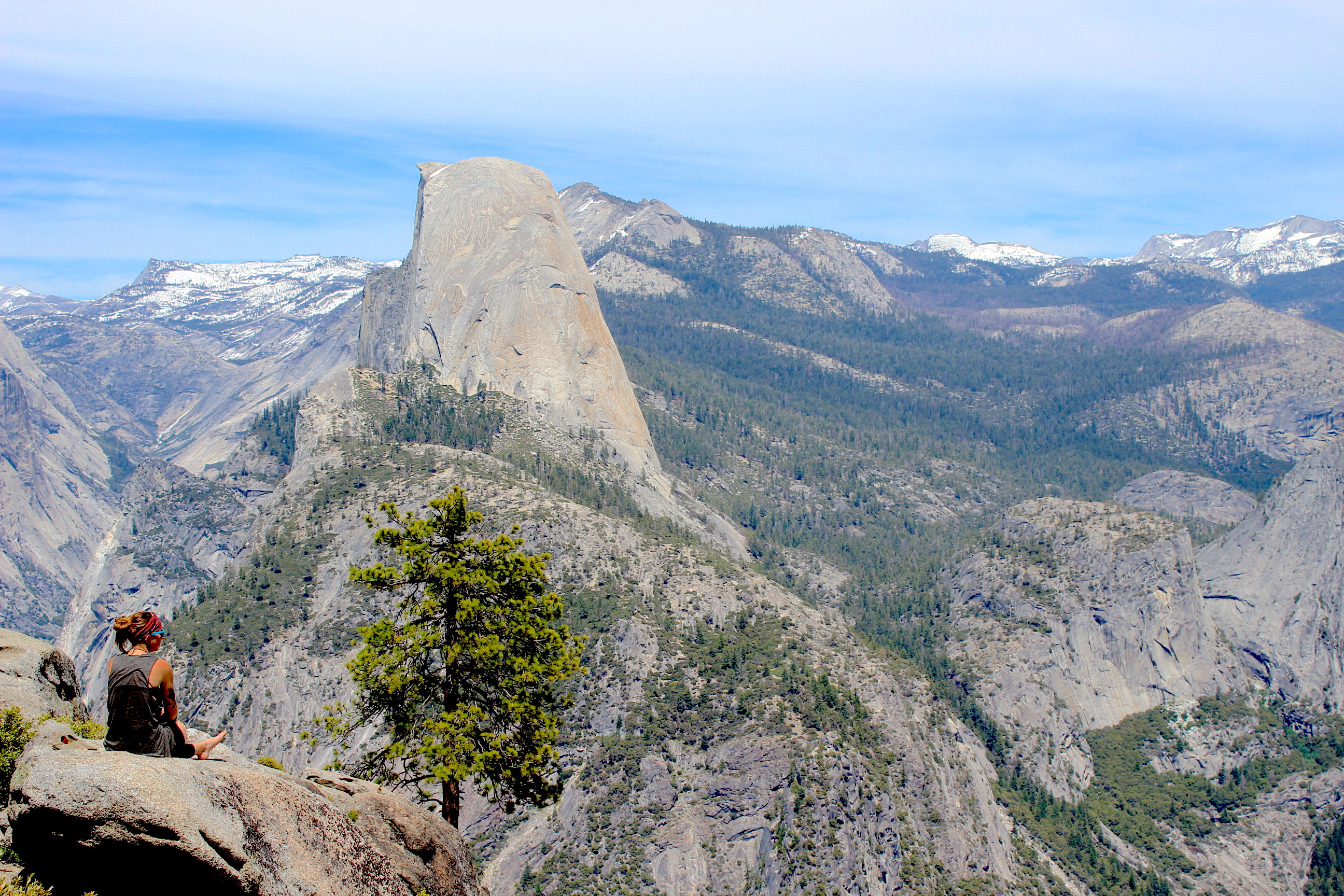 Going back from Sequoia was a nightmare. Yes the sunset was pretty, yes the day was a blast, but the thousands hairpin turns I had to take spending almost three hours in a shaking car, which eventually gave me motion sickness, was enough to make me decide to look for a place to stay in Fresno. I needed network coverage because I wanted to be “found” in case of need, and it took me forever to leave the “no network” black hole. The only thing that made me go back to the wilderness the following morning was the thought of Yosemite. The great.

Aaaaand the happiness did not last long. The road to the National Park was memorable, yes. California is experiencing a heat wave, at 9 in the morning we already had almost 100 degrees, and at the radio they were saying to drink lots of water, and to be careful. Who would have imagined that with the hot weather and being a Monday of June, Yosemite would be packed with people? I did not guess it for a minute. Humans, thousands of humans everywhere! The heat was not as strong once entered the park so I guess everyone thought it would be nice to go up the mountains? I don’t know. I just saw lines, people waiting in lines everywhere. To get in the park we sat for a good half hour (thank goodness I had my pass), to stop at the typical points where tourists can take photos we had to be reaaaallly patient, and the parking lots were all full, so I could not leave my car anywhere to go for a hike like I did the previous day at Sequoia and like I wanted to do. Bummer. After going around in circle for what seems like forever, in loop, I gave up, and I started stopping at the side of the road, in spots I thought would be safe to get off the car and get a few shots.

Yosemite is indeed one of a kind natural park, but humans make everything so terribly difficult and annoying. I could not find the famous giant sequoia where you can literally pass through, but it does not really matter. I could enjoy the landscape from the Tunnel View, the Bridalveil Fall and of course the majestic “El Capitan“. While staring at the mountain I couldn’t help but think of Alex Honnold and his free solo climb he documented on a documentary I watched on Netflix, which left me with mixed feelings at the time, and still gives me the chills by just recalling it. Well, to get rid of that sensation I stole a girl’s moment, while she was sun bathing on a rock rising above the whole valley where you could spot more falls, the Half Dome mountain, and the snow-capped tips of the mountains in the distance. Stunningly beautiful. Perfect nature. Wowzie.

On my way back I got excited when I could see an eagle, so I taped it and I could take a photo. Yesss. Ah, animals. After Yosemite, I’ve decided to head west towards San Jose, where I eventually spent the night. Golden California “in its splendor” accompanied me while speeding through almost empty country roads, up and down smooth hills, before I stopped on the way when I spotted three horses on the side of the road. They were being bugged by flies covering their faces and almost trying to penetrate their eyes. I felt so bad and so sorry for those animals. I tried to clean them up a bit, one of the three beasts knew I was trying to help and got closer, almost like to say “thanks for trying but there’s nothing you can do”. One just kept on snorting but he let me pet him for a bit. I left sad, trying to think of a way we could avoid these animals to be tortured by these stupid insects. Can we make them wear goggles? Can we use some sort of sonar that repels insects but does not bother the bigger animals? I don’t know, let’s just do something!!!